Share markets rose in the past week – bouncing off oversold lows, helped by less hawkish than feared comments from the European Central Bank (ECB) and US Federal Reserve (Fed), a further pullback in US bond yields, improved outlooks from some US retailers and airlines, merger & acquisition (M&A) activity, solid US economic data and more signs of a peak in US inflation. This saw US shares gain 6.6%, which is their first weekly gain after seven weeks of falls. Eurozone shares rose 4.2%, Japanese shares rose 0.2% and Australian shares rose 0.5%. In Australia, gains in resources and financials offset falls in telecommunications, consumer staples and information technology (IT) stocks. Bond yields generally fell. Oil and copper prices rose, but iron ore prices fell slightly. The “risk on” tone helped the $A rise as the $US fell.

Rate hikes continue, but with mixed messages from central banks.

Of course, it is dangerous to read too much into central bank comments either way. Just over six months ago, the Fed was saying it could be patient in removing monetary stimulus and the Reserve Bank of Australia (RBA) was indicating a rate hike was unlikely before 2024! Ultimately, central banks are data dependent – and they want to see clear evidence that inflation is cooling.

But there are some positive signs that inflationary pressures may be cooling: business surveys are reporting improving delivery times, reduced backlogs and some topping in input and output price pressures; US retailers have seen an increase in inventories, presumably as spending rebalances back to services and production catches up; there are some signs of a slowing in hiring in the US with initial jobless claims starting to trend up, Amazon saying its gone from understaffed to overstaffed and giving up space and Lyft pausing hiring; wages growth in the US looks to have peaked late last year; US core private final consumption (PCE) inflation fell in April to 4.9%yoy from 5.2% and it has increased by 0.3%mom for three months in a row which is well down from last year’s highs; and our Pipeline Inflation Indicator continues to point to a peaking in US inflation. The rollover in core US inflation does little to change the outlook for Fed tightening at its next two meetings as inflation is still too high, but at least it no longer needs to keep getting more hawkish, which in turn has seen market expectations for the Fed Funds rate for year-end fall from 2.75% to 2.64% over the last week.

At this stage it’s a bit too early to relax though. Rising oil and hence petrol prices are a fly in the ointment of the “peak inflation” view and commodity prices generally still look strong. This could be accentuated if Europe bans Russian oil (as looks likely) and there is a disruption to Russian gas flowing to Europe. Even if US inflation has peaked it will take a while before it falls back to levels where the Fed can relax.

And in Australia inflation probably won’t peak until later this year, with petrol prices back up, household energy bills set to rise significantly on the back of higher wholesale power prices from earlier this year (this has been well known for a while, but will start to show up in power bills from July) and supermarkets’ warnings of still-rising prices.

At the same time, shares are yet to see clear signs of a wash out bottom – with VIX and put/call ratios yet to reach levels seen at past major share market bottoms. The bottom line is that while we remain optimistic that recession will be avoided in the next 18 months so and therefore believe shares can rise on a 6-12 month view, there is still risk of more downside in the short term (notwithstanding that the current bounce may have further to go).

Australia’s new Government and fiscal & monetary policy. The new Australian Labor Government still appears to be edging toward governing in its own right, although there is still a possibility it may have to rely on independents or minorities and will have to rely on the Greens in the Senate (or moderate Liberals!).

New global Covid cases fell slightly over the last week with a further decline in Europe. New cases continued to trend down in China and have now rolled over in South Africa again. 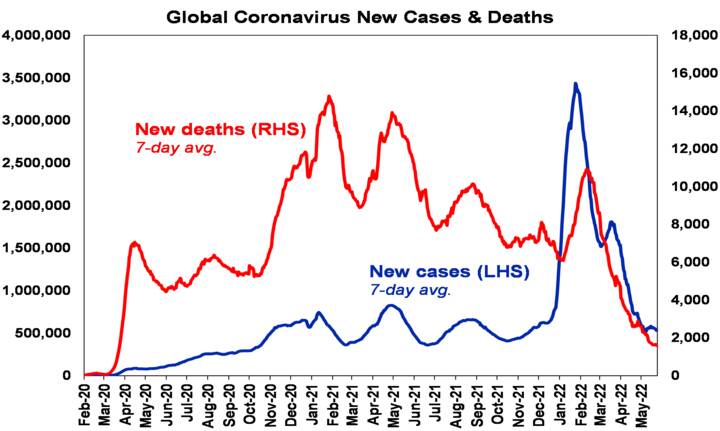 While the US is seeing a rising trend its relatively mild and hospitalisations and deaths (which are not affected by people not reporting) remain subdued. The recent rise in new cases in Australia has rolled over again and hospitalisation and death rates remain low compared to pre-Omicron waves. Monkeypox does not look like becoming the new Coronavirus. While the spread of cases outside Africa is causing concern compared to Covid it’s not as easily transmissible (requiring contact), there are vaccines against it with the Smallpox vaccine around 85% effective in preventing Monkeypox infection and there are treatments for it. 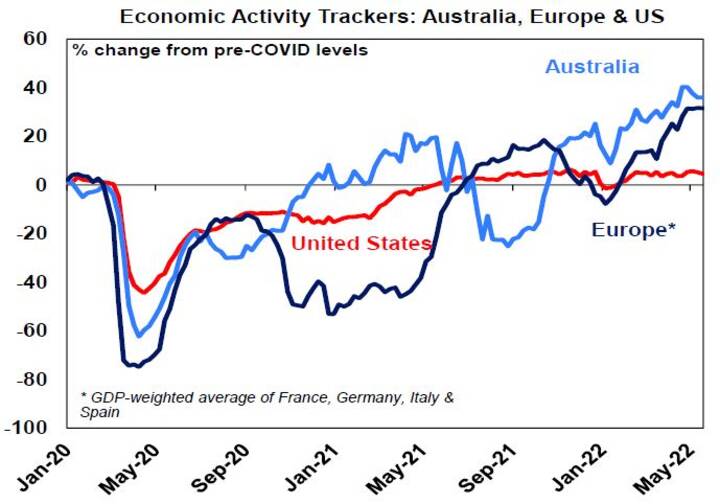 Business conditions PMIs remain strong but slowed a bit further in May, with a rise in Japan but declines in the US, UK, Europe and Australia. The G3 average composite PMI fell 1.3pts but to a still strong 53.8. 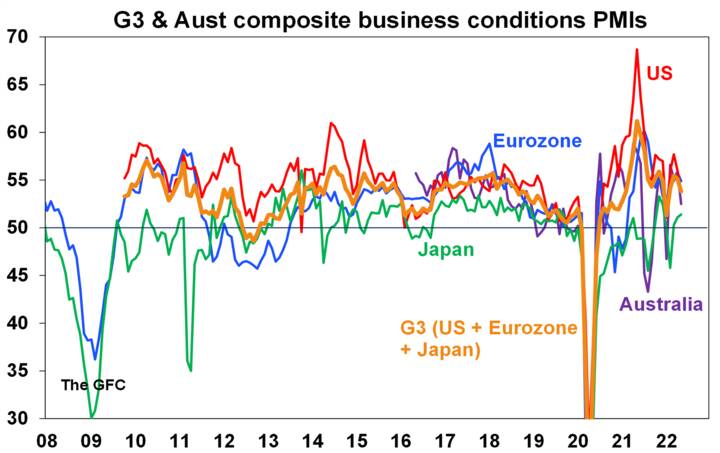 Price measures and work backlogs for manufacturers have eased but remain high. Apart from the decline in the US business conditions PMI for May, other US data was mixed. Durable goods orders rose, with continuing solid gains in underlying capital goods orders and shipments, pointing to solid growth in business investment. Personal spending was strong again in April and real consumer spending is on track for 5% annualised growth this quarter. The solid capex and consumption data over the last week helped dampen fears of recession. Initial jobless claims fell, although the 4-week moving average is trending up. New and pending home sales fell though, reflecting the impact of higher mortgage rates (and home builders delaying sales). And as noted earlier, core private final consumption deflator inflation slowed in April.

The Chinese Government announced more stimulus measures including additional tax cuts to help support growth. However, the measures were relatively modest, with the tax cuts amounting to about 0.1% of GDP. More measures are likely though but so far, there seems to be a confusion between President Xi advocating a focus on ‘zero COVID’ and Premier Li, who seems more focussed on boosting growth.

Australian construction hit by supply constraints and floods, but the outlook looks strong. First, the bad news. March quarter construction fell 0.9%qoq and this included a fall in dwelling construction, as constraints on the supply of building materials and labour impact along with east coast flooding. This weighed down business investment in the quarter, which fell 0.3%. All of which is a dampener on March quarter GDP growth. But there was also good news. Plant and equipment investment rose by 1.2%qoq. Business investment plans for 2022-23 rose a solid 12% on 3 months ago and are up 15% on plans for 2021-22 from a year ago, pointing to a strong outlook for growth in investment. (See the next chart.) And there is a huge pipeline of homes that have been approved and commenced but yet to be completed, pointing to plenty of work for home builders still ahead, even as housing demand slows with higher mortgage rates and poor affordability. Australian retail sales rose a strong 0.9% in April, taking them to about 15% above their pre-COVID trend. This is only partly due to rising prices and mostly reflects the surge in goods demand through the pandemic, so it will likely slow as demand continues to rotate back to services. In the meantime, consumers still seem to be spending despite cost-of-living pressures – helped along by the strong jobs market and excess saving built up through the pandemic. In the US, the main focus is likely to be on May job data (Friday), which is expected to show payrolls up 330,000, unemployment falling slightly to 3.5% and wages growth slowing slightly to 5.2%yoy (from 5.3%). In other data, expect house price gains to remain strong but consumer confidence to fall (both Tuesday) and the ISM manufacturing and services indexes (Wednesday and Thursday) to fall slightly.

The Bank of Canada (BoC) (Thursday) is likely to raise its official cash rate by another 0.5%, taking it to 1.0%, with the BoC remaining hawkish, citing the risk of higher inflation expectations as well as concerns about the global growth outlook.

Chinese business conditions PMIs for May (due Tuesday and Wednesday) are expected to improve a bit, but remain weak, reflecting COVID restrictions.

In Australia, March quarter GDP (Wednesday) is expected to be flat and up 2.3%yoy, with drags from net exports (which are expected to detract 1.8 percentage points) and dwelling investment, weak growth in business investment and solid growth in public spending and consumption. Note though that this follows very strong growth of 3.4% in the March quarter and domestic demand will still be strong. In other data, expect building approvals to show an 8% gain after plunging in March and housing credit growth to remain solid (both Tuesday), CoreLogic data for May to show a 0.3% decline in average capital city prices led by a 1% fall in Sydney and 0.6% fall in Melbourne (Wednesday), the trade surplus (Thursday) to fall back to $8.5bn and housing finance for April (Friday) to fall 0.5%.

Shares are likely to see continued short-term volatility as central banks continue to tighten to combat high inflation, the war in Ukraine continues and Chinese COVID lockdowns impact, driving fears of recession. However, we see shares providing reasonable returns on a 12-month horizon as global recovery ultimately continues, profit growth slows but remains solid and interest rates rise – but not to onerous levels.

Still-low yields and the risk of a further rise in bond yields point to constrained returns from bonds.

Australian home prices are expected to fall as poor affordability and rising mortgage rates impact. Expect a 10 to 15% top to bottom fall in prices over the next 18 months, but with a large variation between regions. Sydney and Melbourne prices are already falling.

Cash and bank deposits are likely to provide poor returns, given the still-low cash rate of just 0.35% at present, but they should improve as the RBA raises interest rates further.

The $A could remain volatile in the short term if Chinese COVID lockdowns persist. However, a rising trend in the $A is likely over the next 12 months, helped by strong commodity prices, probably taking it to around $US0.80.