Three reasons why low inflation is good for shares and property

Share markets are at or around record levels despite lots of worries, particularly around the coronavirus (Covid-19) outbreak. A common concern is that this is because central banks (like the Fed and the RBA) are distorting market forces and just want higher asset prices. And flowing from this its argued that prices for assets like shares and property are overvalued, record highs are artificial, and a crash is inevitable. Markets are at risk of a short-term correction given the large gains since the last greater than 5% correction into August and given the risks around Covid-19. But beyond this it’s a lot more complicated than the bears would have it.

There is some truth to the claim that central banks want higher asset prices. Higher asset prices are part of the transmission mechanism for monetary easing to the economy because they boost wealth and this helps boost spending. As former Fed Chair Alan Greenspan said in 2010 “a stock market rally may be the best economic stimulus”. But it’s not quite that simple:

The next chart shows the ratio of share prices to consensus expectations for earnings over the next 12 months, which is often referred to as forward PEs. As can be seen, these are now above their long-term averages in the US and Australia, although US and global PEs are still well below tech boom extremes. However, the next chart shows the long-term relationship between inflation on the horizontal axis and the price to earnings ratio on the vertical axis. The PE tends to move higher as inflation falls, although its less clear once inflation falls into deflation. And right now we have very low inflation of just below 2% globally. 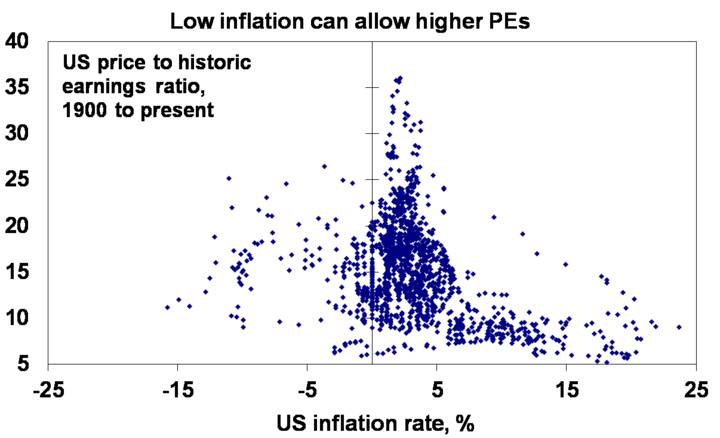 A rise in PEs in response to low inflation, providing it’s not deflation, makes sense for three reasons: Finally, low inflation means improved quality of earnings as firms tend to understate depreciation when inflation is high and so overstate actual earnings. So again, investors are prepared to pay more for shares when inflation is low.

So, while share markets may be around record levels and price to earnings multiples are relatively high there is some rational for this given that it’s a low inflation and low interest rate world. And the longer inflation remains down its conceivable that the higher PEs may go. How high is impossible to know for sure. But as a result, it makes sense to look at share market valuations that allow this. The next chart subtracts the 10-year bond yield for the US and Australia from their earnings yields (using forward earnings). This basically gives a sort of proxy for the equity risk premium – the higher the better. While this gap is well down from its post GFC highs, it’s still reasonable, suggesting shares are still more attractive than bonds. Of course, this will change if bond yields rise, but as we have seen in recent years this is taking a long while to eventuate with various events including trade wars and the coronavirus outbreak conspiring to keep yields low. Basically, the same applies in relation to property and other assets in that lower inflation drives higher valuations for them too. This is evident in lower rental yields (or capitalisation rates) as lower inflation and interest rates pushes up the price relative to rents that investors are prepared to buy property at. This has certainly happened in Australian property markets with rental yields falling sharply since the 1980s and 1990s. This is particularly the case for residential property to the point that it is overvalued on some measures, with a shortage of dwellings relative to underlying demand enabling this to be perpetuated (but that’s a whole other issue beyond the scope of this note!). If the rental yield is inverted and expressed as a PE it would have risen to around 20 times for high quality commercial property but to a whopping 50 times for residential property, compared to around 12 times for both in the early 1980s and compared to around 18 times for shares. This would suggest residential property remains relatively expensive! So, what’s the catch?

There are two catches. First valuations are no guide to timing markets and none of this precludes a correction in shares, particularly given the risks around coronavirus as noted earlier.

Second, just as low interest rates and low bond yields mean low prospective returns from cash and bonds, high PEs – or their inverse of lower earnings yields – and lower rental yields for property point to more constrained returns from shares and property on a medium-term basis. The following chart shows a scatter plot of the PE ratio for US shares since 1900 (horizontal axis) against subsequent 10-year total returns (ie dividends and capital growth) from shares. It indicates a negative relationship, ie when share prices are relatively high compared to earnings subsequent returns tend to be relatively low. The bottom line is that while shares may be vulnerable to a correction, the rally in markets does not seem excessive given the low inflation and low interest rate environment. Key to watch for would be a recession, which would depress earnings and risk tolerance, or a sharp acceleration in inflation, which would drive sharply higher interest rates and a revaluation downwards in prices for shares and other assets. But beyond the risks to economic activity posed by the coronavirus outbreak both seem unlikely at present.